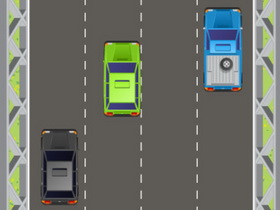 Chase Racing Cars
Chase Racing Cars is a good game for players who like car racing. The car you control in the game moves forward by itself. You task is to control it to move left and right. Try to collect as many golds as you can during the march without hitting the other cars. It requires you react quickly on the road. Start the game right now and enjoy it!
Chase Racing Cars is playable on PC, Apple and Android Devices, both mobile and tablet, enjoy the fun of playing the mobile game with friends. The game was played 969573 times since November-13th-2017, and was voted 2430 times, 66.85% of players like the game.
Control: Use left or right keys to control.
Tags: Achievement Games - Highscore Games - Kids Games - Boy Games - Avoid Games - Collecting Games - Car Games - Driving Games - Bomb Games - Mobile Games
Home - Random Game - TOS - Privacy Policy - PK.4J.COM © 2017