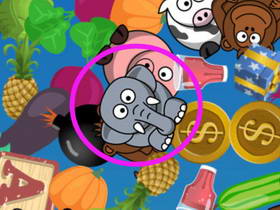 Fruit Snake
The snake is very hungry now. Can you take it to the orchard to have some fruits? There are many kinds of fruits in the orchard including apple, banana, cherry, grapes, watermelon, orange and kiwi etc. Your task is to control the snake with the left and right arrow keys to help it have as many fruits as you can. Join in the game Fruit Snake now and test how big your snake would become. Don't forget to share the interesting game on social media. Have fun!
Fruit Snake is playable on PC, Apple and Android Devices, both mobile and tablet, enjoy the fun of playing the mobile game with friends. The game was played 52972 times since February-7th-2018, and was voted 199 times, 62.94% of players like the game.
Control: Use the left and right arrow keys to control.
Tags: Achievement Games - Highscore Games - Kids Games - Boy Games - Relaxation Games - Avoid Games - Collecting Games - Puzzle Games - Animal Games - Timing Games - Mobile Games
Home - Random Game - TOS - Privacy Policy - PK.4J.COM © 2017