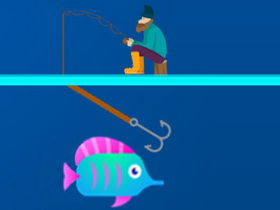 Fishing Frenzy
Are you good at fishing? Join in the game Fishing Frenzy to fish crazily. Try to catch as much fish as you can with limited worms and bombs in limited time. If you want to get the extra time, bombs and worms, don't forget to collect the bonus time, bombs and worms during fishing. There are 20 levels in the game. Submit your score to test whether you are a fisher magnate among the players on the leaderboard.
Fishing Frenzy is playable on PC, Apple and Android Devices, both mobile and tablet, enjoy the fun of playing the mobile game with friends. The game was played 271049 times since February-20th-2018, and was voted 1043 times, 60.13% of players like the game.
Control: Left, right and down arrow keys to move. Space to bomb.
Tags: Achievement Games - Highscore Games - Kids Games - Boy Games - Relaxation Games - Collecting Games - Timing Games - Bomb Games - Fish Games - Fishing Games - Mobile Games
Home - Random Game - TOS - Privacy Policy - PK.4J.COM © 2017